Yesterday, I hosted a launch party for my debut novel, The Caldarian Conflict.Â  I invited virtually everyone I knew within a 50-mile radius to come to the signing event hosted at a local Rochester MN attraction, the Plummer House.Â  Overall, it was a huge success from my standpoint, with sales exceeding expectations.

As such, I want to share what I learned with others and record what happened so I can hopefully repeat the success next time.

Since my own book launch was the first I’d ever attended, I had little information to go on when my wife and I planned this event.Â  Brenda found lots of ideas, and we talked about a lot of different options.Â  What follows is a list of decisions, why we went with it, and what I think about it now.

There were lots of things to consider as we marketed the party. We tried lots of traditional marketing, like:

Beyond that, we carefully considered what things would draw people to our party.Â  For example, we knew that these things would help people say “yes” to coming:

With all of these reasons to say yes, who could say no?Â  🙂

Timing was pretty easy.Â  After I’d written the first couple of chapters of my novel, I knew I was going to finish.Â  I set a target completion date of September 19, 2011–which is International Talk Like A Pirate Day.Â  Since my novel has a pirate theme, it was a perfect fit.

The pirate theme allowed us to have a second reason to celebrate the day: if nothing else, we could have a Pirate Day party.Â  This helped create another reason for people to say yes to coming.Â  Plus, since it related to the theme of the novel, we were also pulling in the target audience likely to be interested in the novel.

The location was more difficult.Â  Originally we wanted something located downtown so we could maximize parking ability, random walk-bys, and the likelihood that people could find the place.Â  After looking at prices and a couple of options, we were concerned about the costs.Â  Thankfully, Brenda came up with the option that the Plummer House and grounds could be rented for significantly less than any space we’d looked at.

There were several other advantages of the Plummer House that we discovered:

So, in short, the location and timing was a big win that helped this event succeed.

To avoid hurting sales, we didn’t want to use giveaways that included the novel.Â  Brenda did a wonderful job creating lots of different door prizes, including this one:

It included some cashews, a pair of mugs engraved with the title of the novel, and a copy of The Pirate Primer, so the winner could learn how to better talk like a pirate.

Other door prizes were targeted for children and teens, with special consideration given to each age group.Â  Being new parents, we wanted to make the event as family-friendly as possible.

Also, we had lots of little gift bags, special bags for the first ones to arrive, and a free eye patch.Â  My talented mother also created custom-made bookmarks for the books.

We received a ton of positive feedback around all the giveaways and ideas designed to keep the party a positive experience.

Overall, the giveaways were a definite win.

Brenda found a plethora of pirate-themed decorations from Amazon, Oriental Trading, and others.Â  We may have helped keep some of these businesses afloat in tough economic times.

While we found lots of things we liked, we overbought.Â  Due to time restrictions, we didn’t use all of the things we purchased.

Also, for every item we put up, we extended our tear-down time at the end.Â  When I release my next book, assuming we do a party, I’m planning to take a minimalist approach to decorations.Â  Not only will this reduce costs, but it will also help save us time in setup and tear-down.

In summary, while the decorations were cool, I think we overdid it.Â  It’s an opportunity for us to improve for next time.

We purposely bought much more food than we thought we needed.Â  We had a few friends volunteer to make things for us, and a talented friend of ours volunteered to help make some fancy hors d’ourves.Â  We had shrimp on guacamole and crackers, salmon on a custom blend of herbs and cream cheese, and many other seafood-themed snacks.Â  For the adults, we included rum balls as a tasty dessert.

For the kids we knew would come, we cooked pizza rolls and chicken nuggets.Â  For dessert, we had cupcakes, cookies, and candy readily available.

Everyone loved the food.Â  A definite win, and something I’d do again.Â  Next time, I might buy a little less, but I’d rather have too much food than too little.Â  A side benefit: my coworkers at my day job got to help me take care of the leftovers.Â  I think they’d declare it a win too.

From a strict income/amount spent perspective, a launch party is not likely to be worth it for a first-time author.Â  Unless you’re selling hundreds of books, the income from the party will not cover the costs.

That said, there are many intangible benefits of hosting a launch party beyond selling books.Â  In no particular order, here are some of the benefits we found:

Things we thought of during/after the party

In no particular order:

Bottom line: This is something I’d love to do again.Â  All I have to do is finish writing another book!

First shipment is in!

I received the first shipment of my books today. Wow, that’s a lot of books.

And I’ll be signing every one of them. Holy cow!

Here’s me standing next to the pyramid: 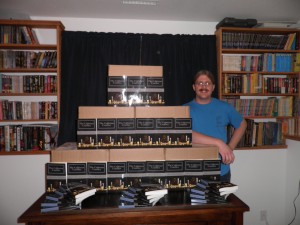 And me trying not to knock over the pyramid:

Proud author trying not to knock over pyramid

I’m excited.Â  Now I’m off to go sign them and get them ready for shipping!

The book trailer for The Caldarian Conflict is now available. Check it out and let me know what you think!

I took a vacation day today for a 3-day self-imposed, limited-Internet-connectivity weekend.Â  I’m attempting to finish up the first draft of my novel.Â  My goal is to write the remaining 15,000 – 18,000 words for the final scenes in the novel.

Day 1 was mostly successful. I ended up writing 5074 words (as of now), and may still write a little more yet today.

My Internet addiction is stronger than I realized, so I still ended up checking my email and responding to messages about a dozen times today. I don’t feel awful terrible in light of the productive day, but it might have been nice to have completed another thousand words to make the rest of the weekend a little easier. I also checked Twitter more than I should have.

Tomorrow I’m going to try a few scheduled Internet checks: once in the morning, once mid-afternoon, and once in the evening. Perhaps by trying to schedule these access times, I’ll be less tempted to cheat by signing on.

Has anyone been able to successfully unplug to focus on writing? I’d love tips on how to encourage myself to avoid satisfying a craving for Internet access.Â  Perhaps tip #1 should be to avoid writing blog entries. 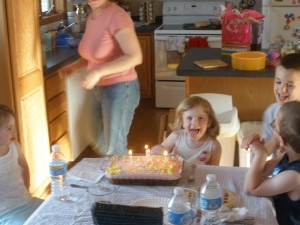